To our patients,
As you know your care and safety and the safety of our team is our top priority.
Recommendations to dental offices are changing rapidly regarding shelter in place, social distancing and essential dental treatment. We are working hard to remain compliant with the recommendation by the American Dental Association, California Dental Association and our Governor that California dentists suspend all care other than essential and emergency treatment.
If you have any questions regarding your dental care or have urgent concerns, please call us or send a direct message through our website; we are here for you and will be seeing emergency patients.
Our phones will be answered during our normal business hours and, as always, we can be reached outside of the business hours for any emergency calls.
We are looking forward to returning to patient care and the opportunity to once again visit with our dental family of patients…we miss you all!
Thank you for being our patients!
Dr. Sharon Mateja and Team, Jennifer, Deanna, Sandra & Erika
✕

How Sleep Apnea Can Affect Your Health 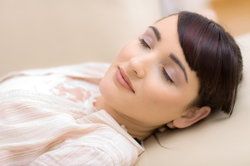 Over 18 million Americans have sleep apnea, and it’s estimated that at least half of those cases are undiagnosed. For the average person, this disorder is not life-threatening. However, all cases negatively affect one’s sleeping habits, and can lead to a host of more serious complications. To better understand this condition and its consequences, here are some key facts from Rancho Cucamonga dentist Sharon B. Mateja.

What Is Sleep Apnea?

Sleep apnea is the chronic interruption of one’s breathing pattern while asleep. People suffering from this disorder will experience irregular or obstructed breathing, resulting in a lighter rest. There are two established types of sleep apnea:

Central sleep apnea occurs when the body does not properly receive respiratory signals from the brain. As a result, patients will experience cyclical pauses in their breathing, lasting 10 to 30 seconds.

Although the causes of sleep apnea differ, they share comparable symptoms with which the disorder may be diagnosed.

In addition to the signs noted above, sleep apnea can lead to further complications if left untreated. For instance, patients with ADHD may find their symptoms exacerbated by sleep apnea, while newer studies suggest that it could raise one’s risk of cancer over time. It has also been linked to an increased risk of the following conditions:

Fatigue from sleep apnea can have an indirect effect on one’s daily life, such as less exercise, poor academic performance, or impaired motor control. The consequences of a light sleep are far reaching.

Since obstructive sleep apnea is caused by a physical obstruction, its treatment is more straightforward. Doctors may recommend positional therapy, in which patients learn more effective ways to sleep. Another suggestion is to avoid alcohol or certain medications that relax muscles. Sometimes, losing weight can promote the passage of air by reducing tissue in and around the throat. If lifestyle changes do not work, other treatments include surgery or wearing a continuous positive airway pressure (CPAP) mask during sleep.

Before opting for more invasive treatments, patients may want to try an oral appliance to wear while asleep. This device can adjust the jaw’s alignment, suppress the tongue, or a combination thereof, allowing the airway to open up.

If you suffer from sleep apnea, discuss these treatments with your doctor to determine which option best addresses your needs.

Dr. Mateja is experienced in the fields of general, restorative, and cosmetic dentistry, with many satisfied patients. For more information on sleep apnea and its health effects, contact our office today. Don’t hesitate to call or email us with your questions or concerns; we’re happy to assist you with all your dental needs!

Please note: some images are of models, not actual patients.
©2022 Sharon B. Mateja, DDS